Fearless Girl is the name of a bronze statue of a strong and confident girl created by Kristen Visbal and installed in New York City in 2017.  The statue was funded by financial company State Street US and its unveiling was timed to coincide with a marketing campaign by State Street US that sought to improve gender diversity in senior business leadership.

In 2019 the artist entered an agreement with Maurice Blackburn Lawyers (MBL), an Australian law firm, to supply a replica of the Fearless Girl statue for installation in Melbourne as part of MBL’s campaign for gender equality and equal pay.  MBL secured the sponsorship of two superannuation funds, HESTA and Cbus, for its campaign.  Here is a copy of an invitation to the launch event unveiling the statue in Melbourne: 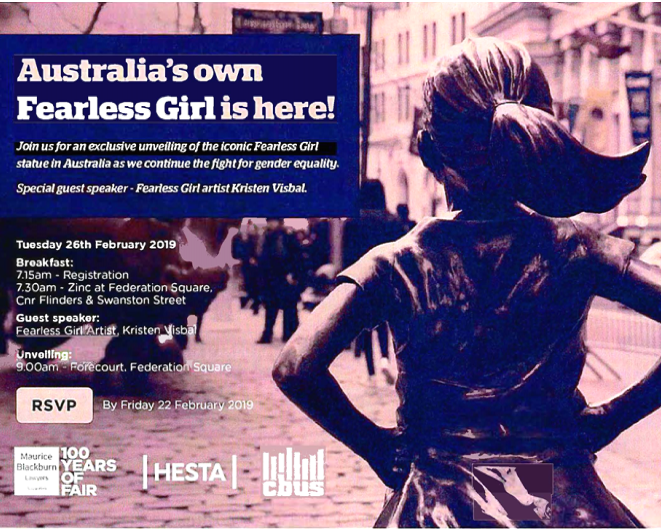 State Street US was not happy about this and, together with its Australian subsidiary State Street Australia, sued MBL, HESTA and Cbus, making a wide range of claims, almost all of which failed.  The Federal Court judgment can be found here.  The judgment is lengthy, and I will just comment on a few points of interest relating to intellectual property.

State Street US claimed that the Australian companies had infringed copyright by reproducing and communicating to the public 2D copies of the Fearless Girl (in promotional material such as the invitation above).  This was because it had an exclusive copyright licence from the artist.  An exclusive licence of copyright gives the licensee the right to sue for copyright infringement.

The difficulty for State Street US was that its licence was narrowly limited to:

The judge held that MBL’s campaign covered gender equality and equal pay – not “gender diversity issues in corporate governance and in the financial services sector”.  Even the involvement of the two superannuation companies did not mean that the copies of Fearless Girl were made in connection with “financial services”.  State Street US was trying to sue on the basis of rights that it did not have.  Thus there was no copyright infringement by MBL, HESTA or Cbus.

It is common in intellectual property licences, especially patent licences, for the rights owner to divide the right to use the IP into different fields, thereby maximising the return on the investment in the IP.  But there may be an overlap between the fields, or the dividing line may be unclear or, as in the Fearless Girl case, the licensee may not receive the rights it believed it was gaining.  In addition, if a patentee carves up the right to exploit the patent between different licensees, no licensee can sue for patent infringement.

If an IP owner wishes to divide its rights into different fields between different licensees, the implications need to be carefully thought through by both licensor and each licensee.  Careful consideration of the drafting of such clauses is also essential.

Passing off and misleading and deceptive conduct

State Street Australia’s clients were sophisticated wholesale investors and there was no promotion of its services to retail markets or consumers.  The judge did not consider that the clients of the Australian financial company would make any connection between MBL and the State Street companies just because they had used a statue to promote a financial product two years before.  MBL’s reputation was very different to theirs as it was known for its social justice work and “fight for fair” against big corporate and government interests.

Sometimes an overseas company can show that there is a “spill-over” reputation in Australia from its overseas activities, arising from the Internet, use of its trade mark in movies, travel to overseas destinations etc.  However, this can be difficult to prove, and in the Fearless Girl case, the judge held that there was no spill-over reputation.

Not all uses of a trade mark infringe a registration, even if the use is exactly the same as the registered mark.  One reason is if the allegedly infringing use is not for a trade mark purpose – which is to distinguish the goods or services of the alleged infringer from those of other traders.  Here the judge considered that MBL, HESTA and Cbus were simply using the words FEARLESS GIRL as the name of the statue.  Indeed, there was no other way to properly describe it.  Even use in the hashtag #fearlessgirl did not infringe because the judge held that hashtags identify the topic or subject of a post, not its maker or source.

The judge also rejected the argument that MBL used FEARLESS GIRL for services covered by the trade mark registration. These included publicity services as well as financial services.  MBL was simply not in the business of providing publicity services, much less financial services.  Trade marks must be registered for specific goods and/or services and this confines the protection that they receive.  It is therefore important, when applying for a trade mark, to list all the goods and/or services for which the mark is being used or intended to be used.

Intellectual property is a specialist area of law.  I have practised in this area for over 30 years and can help clients with any of the issues raised in this blog.  I can be contacted here.

This article provides general information only, and is not intended as legal advice specific to your circumstances. Please seek the advice of a legal professional if you have any particular questions.